The State of M&A In Nashville 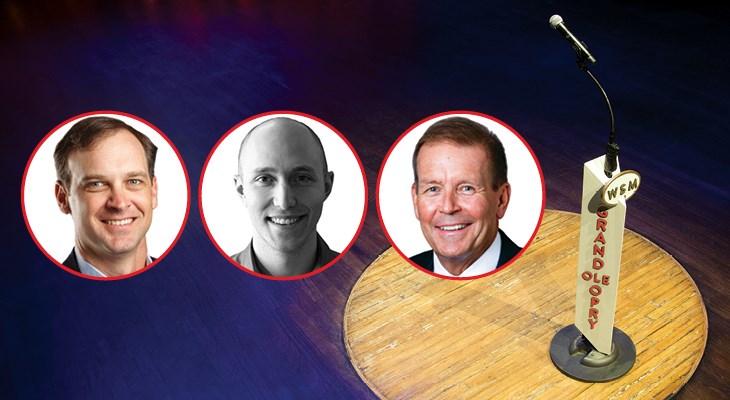 “It is about as robust as I've ever seen it, and I've been in this business with UBS for 28 years.”

In Johnson’s mind, if there’s one characteristic of the market today that makes it so remarkable, it’s the mountains of investment capital available for M&A deals.

“That has taken valuations higher than probably I've ever seen them because they want to put the capital to use, and right now they all have capital to put to use,” he says.

According to EY’s Global Capital Confidence Barometer, 52 percent of executives surveyed expect their company to actively pursue M&A in the next 12 months, well ahead of the average of 45 percent who’ve shared that perspective since 2010. Executives are mostly seeking deals to acquire new technology and add production capabilities, or as a gateway to new markets, according to the October report.

We spoke with top local dealmakers to get their assessment of the state of the local M&A scene.

Capital is flowing into industries across the board. With many in the baby boomer generation looking to liquidate and move into their next phase, Johnson sees a perfect storm.

“You’ve got folks looking to do something with the business — either sell it to employees, pass it along to family or sell it to a buyer — and you've got plenty of capital out there looking to do these kinds of transactions,” he says. “It's really a robust environment right now.”

Lamar Stanley, vice president at private equity firm Gen Cap America, agrees that deal flow is up. But, unfortunately, that means prices are, too.

“And I attribute that to cheap debt and lots of firms like us with a lot of dry powder out there,” Stanley says. “There’s a lot of people that need to invest, and they're able to pay a little bit higher prices because banks are willing to lend money at better rates. So I guess you would describe the market as somewhat frothy.”

Jared Winegrad, managing director of FINTOP Capital, also sees an M&A market that’s frothy on both the strategic and financial side.

“The thing that's really driving it is the massive amount of dry powder out there,” Winegrad says. “On the PE side, you look at, like, a UTIMCO (University of Texas/Texas A&M Investment Co.), who’s got $50 billion under management, and they're expecting to be at $100 billion in five years. They have to find places to put that money to work.”

On the corporate side, he says, the effect of the Tax Cuts and Jobs Act on corporate profits and the incentives to bring all that cash home has only helped grow the amount of dry powder available for strategic buys.

“So when I say frothy, I don't mean that there's necessarily a bubble, but it's not cheap,” Winegrad says. “Strategics are definitely acquiring for growth. They’re sitting on a lot of powder. If you can sell, it’s a great time.”

Tammy Wolcott, CEO of LBMC W Squared, notes that another reason there's a lot of money that hasn’t been put to work yet is because interest rates are so low.

“We're seeing a fair amount of debt financing,” Wolcott says. “If companies have cash flow, they can leverage that with debt financing and not have to give away so much equity. So I think some of the mezzanine debt is interesting for solid cash flow companies.”

Additionally, some of the interest around M&A is as an investment opportunity.

“It's not just about owning stock anymore,” she says. “People are seeing that there's greater opportunity investing directly in a company as opposed to buying a public company. People want to diversify their portfolios and spread the risk.”

With valuations up and competition for deals high, Gen Cap’s Stanley says his firm has navigated the pricey market by staying patient and sticking to its knitting.

“Our centerpiece in all of our deals remains the management dynamic, and so we have to cast a pretty wide net to find that,” he says. “In terms of the price that we’ll pay, we probably have increased a little bit in this market. But generally speaking, I think what this market has really taught us to do is we just have to be that much more diligent to talk to every intermediary in the country.

‘We're trying to get in front of everyone just because there are so many people competing for these deals, and we just can't count on ourselves to be top of mind with all of them at all times.”

Eric Johnson, dean of Vanderbilt University’s Owen School of Management, says it’s a very exciting time in the M&A space, in part because there are so many owners looking for ways to exit their businesses.

“And there are a lot of buyers that would like to do a deal,” he says. “So you kind of have both the good and the bad working simultaneously.”

Private equity has certainly made its presence felt in recent years, having become better understood to buyers as a potential partner — not just as a buyer but as an investor and, in many cases, a mentor.

“Years ago, it seemed like for somebody to put private equity into your business, they were looking more for a higher level of control,” UBS’s Johnson says. “I see less of that now. I see participation. I see more capital willing to be invested without having to have total control.”

The perception of private equity as an entity that buys into companies, takes all the expenses out of it and flips it for resale also has changed.

“What I'm seeing more on the private equity side is people willing to invest serious money in ideas,” Johnson says. “I think technology is a big part of that. I think they've watched and seen some of these ideas that then turn into a very viable business that gets bought in a pretty short time frame. That's part of what's created this more robust community of private equity money and firms that are out there willing to invest in these companies.”

Vanderbilt’s Eric Johnson agrees that businesses’ understanding of private equity has evolved. But as the sophistication of private equity improves — he says many business schools, including his, now offer more curriculum and course work around private equity — there is still some catching up to do on the part of some businesses to take advantage of the opportunities private equity provides.

“There's certainly a growing interest,” he says, “largely because of it providing a really great way to exit out of a business that you want to liquidate and finding that liquidation without necessarily selling it to a competitor. But then there also is some set of concerns, particularly because the private equity firms have become more professionalized and much more analytical in their approach to doing deals, and many smaller mid-sized businesses aren't up to the rigor that private equity firms are expecting.”