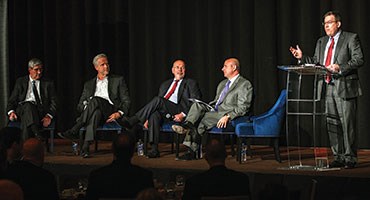 Four of Pittsburgh’s prominent business leaders shared their experiences on the front lines of mergers and acquisitions in an environment of rising valuations. The higher prices are being driven in part by private equity-backed portfolio companies that buy strategically and do add-ons to other deals, as well as family offices with money to spend and a will to do direct acquisitions.

The discussion, moderated by Metz Lewis Brodman Must O’Keefe LLC’s President and CEO Christopher A. Brodman, at March’s ASPIRE 2018 featured:

The process was started and, as buyers started to emerge, the company ultimately sold for $74 million when everyone’s best estimate was that it was going to be a $28- to $34-million deal.
I had two other transactions that I was involved in last year where the purchase price went way out of control, higher than what the professionals estimated.

You cannot start early enough, and don’t underestimate the time and the effort it takes to get prepared. The more prepared you are, I think, the better it’s going to go. I’d also make sure you’ve got the right team. You want people that have experience doing these kinds of transactions. May or may not be the people you’ve worked with in the past, but if you don’t have the right team, it — it’s not going to go well.

All it takes is one bidder that really wants a company to blow everything out of proportion. These days, if we’re lucky enough to buy a company, we wonder if we were the crazy guy that was willing to pay 30 percent more than anybody else.
We end up competing with corporate buyers more than we ever did before, because they’re not necessarily just after scale anymore. They’re buying technology, they’re buying talent or they’re buying a product line, and so they come down into our market and they’re happy to pay eight times EBITDA because that’s such a deal for them.

Eventually, prices have to get more realistic, one would think — back to normal. But what we do know is that, for the time being, every time we model out an acquisition, we have to assume that, when we sell the company five or seven years from now, we may likely sell for a lower multiple than we paid, and that’s a troubling thing.

It wasn’t that long ago that every company we looked at, the first question we would ask was, ‘How could China help or hurt this business?’ These days, we look at it and we say, ‘How could Amazon help or hurt this business?’ So, we want to see a pretty clear technology play for companies on the upside, and we want to see very little, to the extent you can, technology risk on the downside.

Nowadays the PEs are doing bolt-on acquisitions; they’re actually acting very strategic. Because they’re getting a lot of the same synergies that a strategic would get. They’ve got a faster decision-making process; they don’t have to go to a board; they can move a little more nimbly, so sometimes they can actually out-compete a corporate.
But it’s all about what are you buying and, for me, it was all about the management team. We wanted to make sure that that capability we were acquiring was going to stay in the company and that we, as Heinz, could learn from them and leverage it across our portfolio, but also give them access to scale and resources and talent that they didn’t have as a $20 or $30 or $40 million company.

When you’re at these types of valuation multiples, corporate buyers are becoming much more willing to be more flexible on structure than they have been in the past. You’ve got buyers who will take positions that, ‘We will never be a minority investor in a business. I can’t do that. We’re never going to do an earn-out, they just end up in lawsuits. We’re never going to have a partner.’ And all of a sudden now, to justify the valuations, they want to dip their toe in the water a little bit, buy a little piece of the business.

That product works for the buyer and the seller both. Sellers can walk away from a transaction without a large amount of money in escrow, and buyers can essentially have an insurance policy to make claims for things that were not disclosed in the transaction for damages that they incur because of failures of disclosure.

When we sold, we didn’t sell to the highest valuation — it was actually the third highest. There were two higher, but we couldn’t see a cultural fit. We thought this would be a disaster. It was 2007 and we thought, you know, what would happen if there’s a market downturn? Well, there sure was, and they turned out to be a great partner. But if we’d picked the wrong one, it could’ve been a nightmare.