A look into the wild world of raising capital 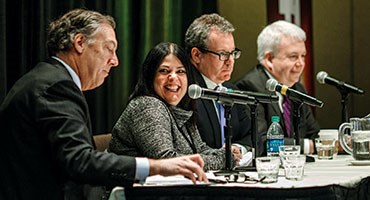 Three dealmakers with different experiences raising capital came together in a panel discussion at ASPIRE 2018.

Kristy Knichel, owner, president and CEO of Knichel Logistics, has gotten innovative with her acquisitions; Patrick D. Dugan, CFO and executive vice president at Wabtec Corp., has a global viewpoint; and Stephen J. Gurgovits Jr., managing partner of Tecum Capital, has sat on both sides of the table, raising capital and deploying it.

Getting creative with capital

In 2012, Knichel received a call from a competitor who was looking to retire. His book of business was in an area where Knichel Logistics wanted to grow.

Knichel Logistics gave him some money upfront and agreed to pay him additional money each quarter, Knichel says. The company also agreed to pay commissions on the business that he brought for the next five years.

The former owner joined Knichel’s staff, but planned to retire within two years. However, he enjoyed the culture at Knichel Logistics so much, he’s still around today after the five years were up.

“Not only have we grown his book of business with our additional services, but the previous owner is bringing in additional business now,” Knichel says.

The model worked well, and Knichel is talking to other people looking to retire. The company could take them on as agents and eventually buy them out.

Since Dugan joined Wabtec 14 years ago, the company has done around 40 acquisitions for about $4 billion in total acquisition value.

“It’s part of our DNA. Part of everything we do every day is try and identify tuck-in acquisitions, strategic acquisitions, growth in international markets and new products,” he says. “The great thing about Wabtec is very strong working capital — cash flow to working capital management — and so a lot of those acquisitions we’ve made were financed through traditional line of credits, maybe a term loan here and there.”

Wabtec also focuses on maintaining its investment-grade rating with Moody’s and S&P, Dugan says. This not only helps Wabtec raise capital, it also helps maintain good fundamentals as it executes its acquisition strategy.

Dugan says it can be challenging to manage the banking relationships — Wabtec has large credit facilities with more than 10 banks — but it comes down to creating partnerships for both credit and other services. Wabtec operates in 30 countries, so it has many needs.

There was a thorough vetting process, so you need a team with a track record and strategic plan. The SBA asked for 150 references.

Tecum Capital Partners II — $180 million in assets with about 75 percent earmarked for mezzanine capital — was deployed over three and a half years across 26 companies, Gurgovits says. Its second SBIC fund, Tecum Equity, comes from 13 institutional banks, high-net worth individuals, family offices and one pension fund. By leveraging the $90 million through the SBA, there’s $240 million of drive capital.

“Everybody’s under a certain amount of pressure to get money to work and what we’re seeing now is not quite covenant-light type (of) stuff, but definitely leverage multiples creeping up, as well, that help justify the potential return if you’re paying eight, nine, 10 times EBITDA for an acquisition,” he says.

Some final words of advice

Fundraising is not for the faint of heart. I wouldn’t wish it against my worst enemy.

Inevitably, there are tough times, and you want good banking partners. And I think, up and down, in terms of company size, sometimes people forget that. They’re shopping for the best rate and the best deal. I always advise people to shop for the best partner, even if you pay a little more, because those are the people that are going to stand behind you when you need them most.

The industry I’m in, transportation and logistics, there’s a lot of M&A activity in the last couple years. Actually, it was making me think, ‘Should I be selling my company at this point, too?’ Because the multiple numbers were up there. I actually even own a franchise for a piece of my business, and they were paying out multiples of 12.

The new tax law is going to change everything, really. We have so much of our business that’s overseas and some of the basic strategy for how we finance our company is driven by that, and tax and tax law. So now they tell you, you have this opportunity to bring everything back.