Forward progress: The State of Technology in Pittsburgh 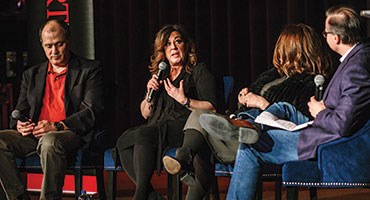 From material science, life science and data centers to energy technology and research on artificial intelligence and social ventures, Pittsburgh is on the cutting edge of technology in many sectors.

“We’re fortunate to be leaders. I mean, we certainly don’t want to be the place that’s trying to sell the last buggy whips when the Model T is everywhere,” says Rich Lunak, president and CEO of Innovation Works.

At March’s ASPIRE 2018, Lunak moderated The State of Technology in Pittsburgh panel, which featured:

I’ve been close to the Amazon process and the proposal submission, and what’s been amazing is the collective assets of this region that I had no clue about, because everyone came together to try to figure it out.

Without a doubt, it’s talent. It’s the universities; it’s the students. That has to be the No. 1 reason for them to pick Pittsburgh. Obviously, I haven’t seen all the other proposals the cities made, but I heard in other cities’ proposals were their proximity to Carnegie Mellon (University). Well, we have Carnegie Mellon, so that should be double for us.

Nowait (the restaurant waitlist app that Robb Myer and Luke Panza spun out of CMU’s business school) is a tremendous example in that I think they leveraged almost every resource we have in our community. It went through Project Olympus and the Innovation Institute and the Swartz Center (for Entrepreneurship) at Carnegie Mellon.

They went into AlphaLab and formed the company and started to secure their first customers. They got investment from the Innovation Works seed fund. They moved into a collaborative workspace in the uptown area called StartUptown. They were supported by local investors like Birchmere and Riverfront ventures and some others. The Tech Council worked very closely with them. They were recently acquired by Yelp and continue to build out in the Oakland area. Some of the founders are now making angel investments.

The life sciences that have sprouted up along the Mass Avenue corridor between MIT and Harvard is absolutely incredible. I think that same exact thing is needed here.

Our deal (with Microsoft) closed in February, and we’re going through the assimilation process now. They are so excited about the Carnegie Mellon connection. What I hear time and time from the executives in Microsoft is, ‘Why didn’t we do this sooner? It’s so obvious — all of our employees that come from that school.’ And now I’ve been (hearing) from other heads of the different divisions, ‘We want you to help recruit. We want you to help make connections.’

Pitt and Carnegie Mellon are really trying to work together on taking all of the best attributes of both universities and figure out how they all line up to get some of these therapeutic companies and pure life sciences to an exit. Pitt just announced LifeX, which is going to be a very interesting life sciences-centric organization that’s going to help incubate companies in The Strip District, led by Dietrich Stephan.

What does Pittsburgh need?

More people. People know Pittsburgh’s population is shrinking. While we do an incredible job … there is something that is not happening in terms of the migration into Pittsburgh. And you can’t tell me it’s the weather, OK? You cannot tell me that, that is off limits, because Boston isn’t having the same problem.

Diversity. Until people accept and advocate — particularly white men — that the people that don’t look just like you deserve a seat at the table, there is going to be an opportunity to close doors on new ideas, new people, migration, all of those things.

Early-stage funding. There are people in it, and I’m happy to say I know and worked with a bunch of them, but it’s just not enough. I think, from a ratio perspective, our region versus others, that’s what needs to grow so when the kids coming out of school have an idea and want to start a company, they don’t get the message from an out-of-state VC, ‘This is great. I want to fund it, but you have to move to Boston.’

If you ask me what’s the algorithm for attracting those people, it’s more exits; it’s more success.