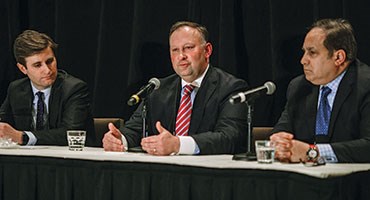 Arnie Burchianti leveraged his health care company, Celtic Healthcare Inc., through a liquidity event. He was looking for long-term patient capital, family money, that would let him run the business as he wished. After Burchianti sold a majority stake to Graham, a holdings company of the family that ran the Washington Post, he used the capital to supercharge his business, under its new name, Graham Healthcare Group. It grew from $30 million to more than $200 million in five years.

To provide insight for others, this deal was dissected at ASPIRE 2018 by:

There will be surprises

I don’t think a lot of business owners are ready for some of the audibles that may come into play when you are reaching a deal.

In today’s world of due diligence, buyers are putting heavy emphasis on reps and warranties; they’re looking for deeper pockets for claims. There are a number of issues that can arise post-closing — some that you can foresee, others that are completely unknown.

Failure happens more than you think

Fifty percent of the people I spoke to in social environments had a failed exit. There’s no science behind this; this is what I heard — either because of ego, because of greed, because they didn’t plan for it. I heard stories that scared me.

I wanted an independent group to really hold me accountable to make sure that I was making the right moves, because as an entrepreneur, you just kind of go. So, I flew around and met people. There were people that were highly recommended, and I would walk out of a meeting like, ‘No way in heck am I having that person as an adviser.’

That’s where I think the best advisers are. They can take issues off the plate of the owner, but they know what their lane is. They know what they’re supposed to do and get it done, and don’t overstep.

Somebody that may be with you a long time and may have served as a general counsel or an outside lawyer that’s done a great job for you over many, many years, be mindful they may not be the best person to lead the exit strategy. And that’s not with any disrespect to that individual; it’s just a reality in today’s world.

Too many business owners are hoping that their kids will come along and take over the business, and they push them into it. They’re forcing a round peg into a square hole or the opposite therein. That’s just something that leads to disaster because if you’re going along a road that is going to lead to a dead end… When you get down to that dead end, you passed up some of those opportunities that would’ve been open at some point.

What we typically find is that clients are less likely to pay attention to the succession side of the equation. They’re so driven by the liquidity piece, and sometimes you can even have fractured counsel … And if those two pieces aren’t coordinated, you can end up with some really mixed results.

There is nothing more heart-wrenching than seeing a business owner having worked their whole life and not planned well, and the aftermath. And so, I think the common thread here is to plan.

If you’re prepared upfront, if your financial statements are in the right form and if you’ve cleaned up the balance sheet — if you’ve done a lot of things ahead of time, it could mean an additional 5, 7 percent on the purchase price. So, doing your homework really does return the value of the fees you may have otherwise spent.

Half of knowledge is knowing where to find it.

Wealth management firms are so used to having business owners who come to the table and say, ‘Well, I was offered this amount of money for my business yesterday. What can I do now?’

Getting the right people around organizations is everything, and governance. It seems to me, in society, it’s getting more and more spreadsheets, and less and less human interaction and focus on what really drives businesses.