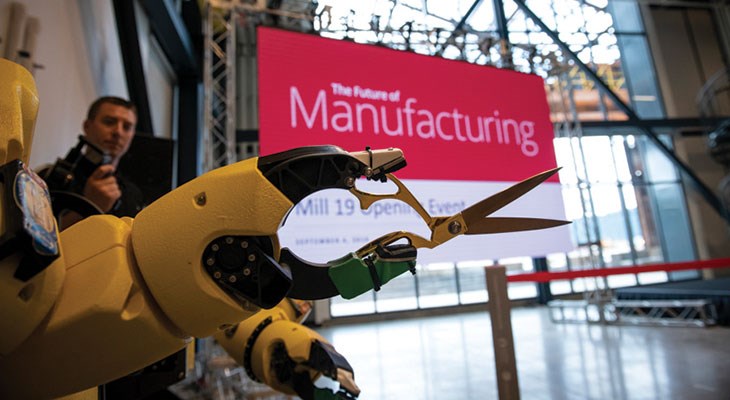 “Mill 19 at Hazelwood Green represents both our storied past and the promise of the region’s future as a global innovation leader,” CMU President Farnam Jahanian said at the grand opening. “The opening of this hub will usher in a new era of manufacturing while also serving as a powerful reminder of what we can achieve when public, private, civic and community partners come together to fuel innovative discovery and broaden opportunity.”

The facility sits on the 178-acre Hazelwood Green site, the largest remaining riverfront brownfield within Pittsburgh’s city limits. Three Pittsburgh foundations — the Claude Worthington Benedum Foundation, R.K. Mellon Foundation and The Heinz Endowments — purchased the land in 2002. The Regional industrial Development Corp. revamped the original steel mill structure, which closed in 1997, tearing off exterior walls to construct a “building within a building,” according to the Pittsburgh Regional Alliance.

Mill 19 will function as a collaborative innovation space for MFI and ARM, CMU reports. The two organizations occupy the first two floors of the building and nearly 60,000 square feet. The space includes a high bay and a corridor of flexible lab bays, as well as a conferencing and workforce training center.

MFI was launched in 2017 after receiving a $20 million gift from the Richard King Mellon Foundation. MFI brings CMU researchers together to advance discovery in machine intelligence, manufacturing technologies and human intelligence. The initiative aims to attract public and private sector partners to push advanced manufacturing research, bridge the gap between manufacturing research and industrial use, and foster economic development in the region and the state.

ARM also was launched in 2017, after receiving a $80 million grant from the Department of Defense. It seeks to take new technologies and accelerate their adoption into commercialization, while catalyzing the workforce development programs to ensure that the United States has a skilled workforce for emerging technologies.

Catalyst Connection, southwestern Pennsylvania’s manufacturing extension partner, is moving its headquarters to the third floor of the Mill 19 building in November of 2019. The organization serves as a resource for small and medium manufacturers in the region, and will collaborate with both MFI and ARM.

In July, Carnegie Mellon announced that it acquired options for an additional 8.3 acres on the Hazelwood Green site for a possible expansion. The university plans to establish a committee to explore potential uses for the area, working closely with the community and in collaboration with the Greater Hazelwood Neighborhood Plan.