The whys and hows of buying a business 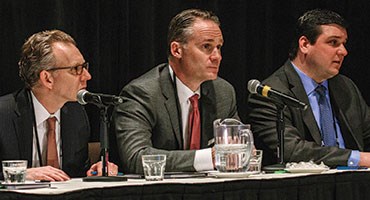 When growing through acquisition, it’s imperative that the acquisition is the right company at the right price with the right integration strategy. That way you can make sure the company strengthens your existing business and accelerates your business goals. Business leaders and dealmaking experts shared what’s worked for them at ASPIRE 2018.

The buy versus build decision just comes down to timeline. It’s much quicker to buy something than it is to build something. We’re always weighing that with the cost rate. So, the cost of an acquisition and time can be prohibitive versus the cost of a greenfield acquisition.

If you go into a situation where you’re going greenfield, while that may be cheaper, one of the things that you have to deal with is the only thing you can bring to bear on that is resources and capabilities you already have.

Advisers on your side

A potential buyer who doesn’t have a track record — can’t demonstrate that they have financing in place, can’t demonstrate that they know what they’re doing when it comes to negotiating and executing an M&A transaction — is going to lose out in the competitive process to someone who can show up with a high probability of getting the transaction done.

You only find out the real reason a guy sold his business the day after you close. You hear all this stuff about, ‘I don’t want to spend time, or I want to do this or that.’ But there’s a reason why, right? I’m a big believer that they’re doing it either out of fear or greed. They’re either nervous about something, that something bad is going to happen and that they’re going to lose some value, or they think, ‘Geez, this is the absolute top of the market.’

One of the things that you have to make sure is that you understand the business you’re acquiring — at least the type of business they’re in — so that you can ask the right questions. So in our case, we’ve acquired businesses that were complementary to the base business we already had.

What could go wrong?

The bad things almost always start from the beginning, and they almost always seem like they’re based on just a fundamental mystery of what the business is that the buyer’s buying at the time they bought it and trying to turn it into something that it’s not.

There’s no question that the biggest challenge in my experience is always fear. We actually have a presentation that we go through with the sellers on what to expect after. We do this even as we’re negotiating the deal. So, here’s how we hold people accountable, here’s how we do meetings, just the cultural issues in general, because the (lack of) trust and credibility is what will make an integration unsuccessful.

The numbers are important, but the people end up being much more important. And that’s always the case for us — the difference between a deal that doesn’t go well and a deal that goes really well.

If you’ve got a business that’s an add-on that’s a third of the size of a platform, you’re probably not going to see the same multiple, but you’re going to be able to contract that difference over time by finding a strategic buyer.

We bought two companies between 11 and 12 times EBITDA. Those were what we think are very high-quality assets that have the ability to grow, but it’s a tough market and it’s very, very competitive. I will tell you that I don’t see that changing significantly. As interest rates tick up, that should probably moderate prices a bit. When I say moderate, not to bring them down, but just so that they don’t continue rising.

We start integration planning as soon as we have an LOI (letter of intent) signed. We assume that we’re going to execute the deal. We don’t get to that point without being serious about closing.

You really have to always be integrating because we want the car to be running down the road at 100 miles an hour. But if we haven’t put the lug nuts on, we’re not going to go very far, very fast. There’s no silver bullet. It’s one of those things — you have to keep pushing. You’ve got to push hard at the integration, and then you’ve got to push hard on the growth at the same time.

Before you do anything, you’ve got to know what you want it to look like after it’s over. It’s tremendous to find an opportunistic acquisition candidate that you can jump into, but the best opportunities and the best deals and the best outcomes come from starting at a point where you know what the end result is supposed to be and you’re working toward that, as opposed to grabbing the next thing that comes in on the transit.