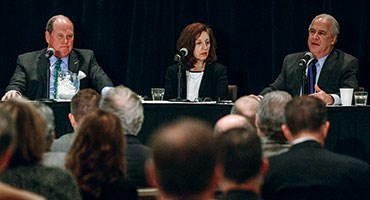 Two perspectives came together in one of the panel discussions at March’s ASPIRE.

Howard W. “Hoddy” Hanna III, chairman of Hanna Holdings Inc., has experienced ownership transfer amongst his family, and Audrey Dunning, senior vice president at CGI, facilitated the sale of the company she led.

In addition, Joseph Wojcik, senior vice president and manager of high net worth strategy for wealth & investment, Huntington Bank, provided an outside viewpoint. He has worked with companies that transfer ownership like Hanna or sell like Dunning.

Hanna helped build his family’s business into an industry powerhouse. The largest privately owned real estate company in the U.S. had a closed sales volume of more than $18 billion in 2017.

To provide roles for all the family members coming into the business, Howard Hanna started to buy other real estate and brokerage companies. Its success has come from allowing everyone to control their individual business unit — building their own entity and the group of people within that.

“If you’re not tough on one another in a family, you’re probably going to lose credibility. I mean, the person in the family has to want to be in the business. None of my kids were asked to come in the business; they just sort of showed up,” Hanna says.

Dunning is the former CEO and one of the owners of Summa Technologies, which had benefited from double-digit growth.

After 20 years in business, however, some founders wanted to cash out. At the same time, Dunning says, growth flattened out, which signaled the need to change. To get to the next stage, Summa required capital.

“You have key stakeholders — your customers, your employees and your shareholders — and I think for a deal to be good, it has to (help) all three,” Dunning says.

In November 2016, Summa started getting calls from strategic buyers. CGI, a large publicly-traded Canadian company, was one of those callers. Dunning says they were intrigued after an initial meeting in March 2017. The cultures seemed similar.

When they met the founder and CEO in Montreal, he spent the day with them, she says. It was telling that the $10 billion market cap company took that time because it demonstrated cultural fit was important to them, as well.

Summa had a letter of intent within 48 hours of that meeting, and the sale closed in August 2017.

“The Summa brand doesn’t exist as its own brand, but it stood for certain things,” she says. “It stood for quality, it stood for the people. Ensuring that some aspects of that culture are retained as part of the new entity, I see that being the way that the legacy lives on.”

Planning is crucial, whether it’s an ownership transfer or sale, including things like the tax structure on both an ongoing and liquidation basis, Wojcik says. Another key consideration is the situs, the place where a property belongs for legal or tax purposes, which can have a significant swing on the tax consequences.

“A lot of folks who have a very successful business started as a small business, and so they’re used to operating on a shoestring. They tend to reduce their CPA and lawyer to compliance work, filing tax returns, consulting issues, and they never really strategically plan with that team,” he says.

Some final words of advice

Nothing beats enthusiasm in any organization. You want to be proud, have a lot of pride in what you’re doing and enthusiasm. That sounds very easy to do, but … that isn’t always the case.

Learn your business and really know the business and be the expert in that business. Because if you’re not, you’re just playing a game and you’re never going to win.

Carve out some time to work on the business versus in the business. Just figure out a way to make that happen. Even if it’s just to get away from the office to do it once a week; just some quiet time to think.

Assemble a good team of advisers. I talked about investment bankers, but also your law firm and your accountants. They’re not just transactions people, but good business advisers, too.

Understand the strategic drivers of evaluation in your business, even if you’re not looking to sell. Understand what those metrics are and build that into your strategic plan, inside goals, so that you’re prepared when the call comes along.

Have a plan all along for an eventual sale because many times, folks don’t plan on selling and then somebody comes and makes an offer that they can’t refuse, or their children, grandchildren, decide not to come into the business.

And then very importantly and often ignored: Have an understanding of what takes place after the sale.