2019 Columbus Dealmaker Of The Year Awards 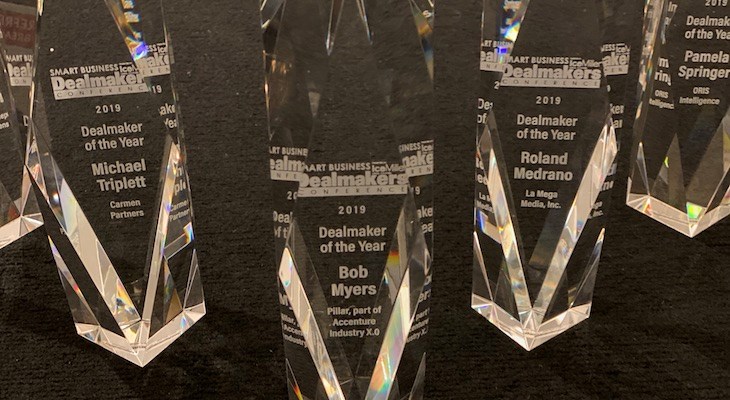 Here are the 2019 Dealmaker of the Year Award winners.

Until recently, Triplett served as president and CEO of Myonexus Therapeutics — a gene therapy research company focused on the development of five pre-clinical and clinical stage candidates for Limb-girdle Muscular Dystrophy. After it achieved promising results from tests in children, he led its sale to Sarepta Therapeutics in April of this year for $165 million. He currently is president of Carmen Partners LLC.

Billiter, who co-founded Deep Lens, manages the largest digital pathology cloud platform that allows pathology groups to collaborate on cancer research. He is focused on growing funding sources to continue product development. In April 2019, he led Deep Lens to close a $14 million Series A financing, which came just three months after closing its VC-led seed equity round. The company’s funding to date totals $17.5 million.

Myers spent more than 15 years growing Pillar Technology from a small software shop into a national influencer recognized as one of Columbus’s fastest-growing privately held companies. The organization secured a private equity investment in January 2018 before being acquired this past August by global IT consulting firm Accenture Plc. The deal was part of an initiative to expand Accenture’s smart-vehicle and other embedded software capabilities. Pillar evolved to become part of its new Accenture Industry X.0 practice, where Myers is now managing director.

Since 1998, this husband-and-wife owner duo has grown King Business Interiors, a commercial office furniture and flooring company, from a small startup into one of the largest family-owned businesses in Columbus. Along the way it acquired installation specialist Workspace Environments this past April to continue expanding its services and reach. Darla is the company’s president, while Dave swerves as CFO.

A serial entrepreneur, Medrano became a partner and CEO of La Mega Media to acquire TSJ Media, which operates radio stations in Columbus, Cincinnati and Cleveland, as well as La Jornada Latinanewspaper with distribution throughout Ohio, Pittsburgh and Northern Kentucky. The sale has since elevated La Mega Media into the largest Hispanic media platform in the region.

Springer is a serial entrepreneur whose latest venture has been serving as president and CEO of ORIS Intelligence, which helps manufacturers manage their pricing policies and preserve the integrity of their brand online. In July, she led the sale of ORIS to California-based PriceSpider, which has retained ORIS’ Columbus-based team as part of the combined company, with plans to continue its growth in the region.