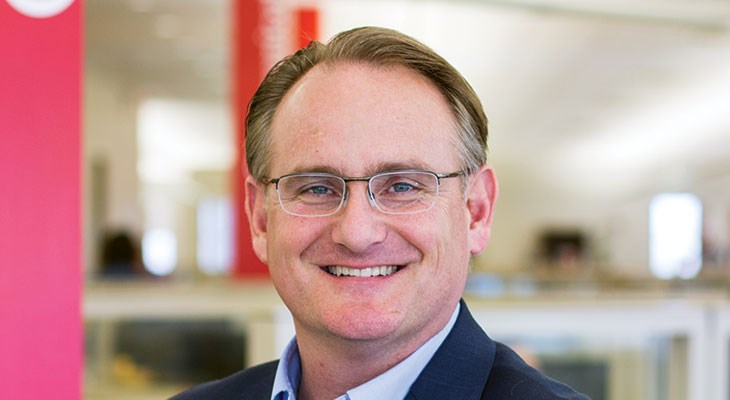 RevLocal, a digital marketing company with about 450 employees in 40 markets across the U.S., doesn’t have bankers knocking on its door.

The 10-year old service company has no collateral and looks to pour everything back into the business, for example by spending millions of dollars annually to build more salespeople, CEO Marc Hawk says.

The former banker had loaned people money before, so he knew what a tough sell it would be to gain financing.

“When I was a banker, you had to be making money,” he says. “You had to have collateral, all those things. I didn’t have any of that and I knew no banker would take my call and say, ‘Yeah, I’d love to give you another couple million dollars.’”

That’s why RevLocal has utilized angel and equity investing to grow. Hawk discussed RevLocal’s journey to fund growth at the Smart Business Dealmakers Conference in September.

Hawk’s brother had convinced him to leave commercial banking and run a dial-up internet startup, Cooper.net, in Mount Vernon, Ohio. The scrappy business did well for about 15 years, but Hawk began fearing he would have to start laying people off.

Cooper.net had always been successful at digital marketing, so RevLocal was born out of a desire to share that knowledge with other businesses. Hawk had some cash already, and his brother was the angel investor or initial owner behind the new company.

“I don’t really call that my capital raise; that was kind of the launch,” he says. “But every time I called him for a check, it started to get a little more nerve-wracking. ‘How many more checks is he going to give me?’ I had to peer into the barrel of cash, to say ‘When are we getting low?’”

You have to constantly project out your cash balance and understand the timing because it takes time to get financing set up, Hawk says.

RevLocal was growing quickly, but it still cost money to grow. So, Hawk sought advice about raising capital, and over the next six to nine months, he had 35 to 40 meetings.

“Fortunately, we were able, after a period of time, based off of our past relationships and trust, to find an angel investor to give us that first round,” Hawk says. “It helped us cover a 24-month journey and enabled us to continue to scale.”

He knew giving up equity would be expensive, which is why he wanted to go as long as possible and grow as fast as possible without giving up equity. Venture money or an equity partner get more on exit than an angel investor does. They also want more say in business operations.

“When you say, angel — they have money, they trust you, they believe in you, but there’s not near as much control,” Hawk says. “They’re not necessarily looking for a board seat. They just want to get a return with people they can believe in.”

About 12 months before the cash flow looked like it would dry up, RevLocal decided to bring on its first equity investor.

A partner to count on

RevLocal approached the investment like any business deal, encouraging competition with multiple bids and terms sheets. One thing Hawk learned quickly was if he saw an unfamiliar term, he had to do the research or ask an adviser who wasn’t involved in the transaction.

“We thought we knew what participating dividends were,” he says. “We thought we knew what participating preferred stock meant, but when we read deeper about it, after about 48 hours, we looked at each other and said, ‘Uh oh, we don’t want that.’ When we did our math, they might come in for 10 percent of the business and leave with 25 percent of it.”

It was also important to find investors aligned with RevLocal’s vision. He’d heard horror stories from others who’d been caught off guard by not knowing who they were partnering with.

“It’s like prospecting — what do they need, and what’s the pain they have?” he says. “The people that are coming to meet with you to invest money in your business are the same. They’ve got a fund, and somebody expects them to do the right deals and get a return. But what is that money’s timeline? When is the next round?”

The equity partner RevLocal ultimately choose was a group that had one investment to make to finish a round. Hawk had spent a year and a half to two years in courtship, meeting every six months and building a relationship.

The investor saw RevLocal as a “safe” investment because the company had already scaled, and Hawk saw the equity partner as an entity that wouldn’t try to control and push too much.

“And it’s been absolutely true three years later,” he says.

During 2019, Hawk began to consider, once again, how to set up the next round of funding. He originally thought it would be more equity but changed his mind after talking to others.

Because RevLocal is close to $50 million in revenue now, an equity investor is going to want 2 to 5x on their exit in a set time frame.

“I don’t know that I want somebody to tell me when you need to exit, sell, partner or have a liquidity event,” Hawk says. “So, therefore, we’re really in a mode right now of studying — I have half a dozen meetings on my calendar. I’m back in the same world I was before, talking to all the different kinds of creative debt situations, revenue funding and everything else — not that we need capital, because we don’t right now, but — just to make sure you never see the bottom of the barrel.”