Victory Capital’s David C. Brown: Each Day Is A New Challenge, A New Opportunity To Make A Deal 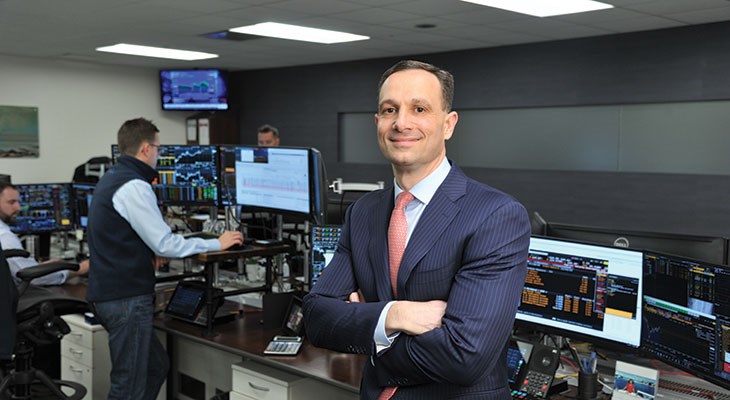 If you think you can rush David C. Brown to get a deal done, you’ve got the wrong guy.

“I have this saying that you only do deals with people who you can work with without paper or attorneys,” says Brown, chairman and CEO at Victory Capital Holdings Inc. “This is a transparent industry, and it brings out the best in some people and is really challenging for others.”

Victory Capital is a global investment management firm with nine autonomous investment franchises, each with an independent culture and investment approach.

“What they’re doing every day is coming in and spending all their time managing money, creating portfolios, doing research and then leveraging a centralized operating and distribution platform,” Brown says. “We manage money for individuals, institutions, union plans, pensions, sovereign wealth funds and kind of everything in between. Everything restarts every day. So if you have a bad day, you get tomorrow and it starts over. If you have a good day, you have to go back tomorrow and prove yourself all over again.”

Smart Business Dealmakers spoke with Brown about Victory Capital’s investment strategy, about last year’s pivotal acquisition of USAA Asset Management Co. and the role that both San Antonio and Cleveland play in the firm’s success.

Victory Capital became an independent firm in 2013 when New York-based Crestview Partners teamed with employees to execute a $246 million management buyout from KeyCorp. At the time, the firm had $22.1 billion in assets under management. That number has grown to $151.8 billion as of Dec. 31, through both organic means and acquisitions.

“Key was a wonderful owner,” Brown says. “They are still a client of ours, and we’re a client of theirs. We’re sitting in a building that we lease from them. It got to a mutual understanding that our business would be better served being independent and having different ownership.”

The value Brown and his team place on employee ownership played a key role in the buyout deal getting done.

“It’s ownership in our business, ownership in our products,” Brown says. “The reason ownership is so important is it aligns us with our clients and it allows our clients to trust us. Getting to that level was really impossible under Key’s ownership because of the way the company was structured. So it was just a natural evolution at that time. The success we’ve had, a big part of that is being able to have this ownership.”

Brown uses this fact to drive the point home: Victory Capital’s employee base has more than $125 million of its own money invested in the firm’s products.

“So we’re clients with our clients,” Brown says. “And we have a long-term view. When I think about our company, I can’t talk much about our company without talking about that. It’s an important part of who we are.”

Brown came out of school as a CPA and initially worked as an accountant and consultant to the investment management industry.

Good results are a product of diligence, discipline and perspective.

“One of the things that I really focus on is breaking big projects down into little things,” he says. “Every time we’ve done a transaction, every time we’ve done an acquisition, we’ve learned. We take a step back and say, ‘What did we learn here? What should we have done better? What did we do well? What won’t we do next time?’”

“The USAA acquisition for us was absolutely transformational,” Brown says. “It more than doubled the size of our assets and doubled our business. It actually got us into a different part of our industry, the direct-to-consumer segment. It also gave us a great opportunity to serve the military and their families and work with USAA, which is just a tremendous organization.”

The deal also resulted in Victory Capital moving its headquarters from Cleveland to San Antonio, where USAA has been based.

“We’re still going to have the same presence we’ve always had in Cleveland,” Brown says. “We just felt that it was a natural evolution for us to name San Antonio as the headquarters. As we think about recruiting with all of the population growth there and some of the attractiveness of the city, it made a lot of sense.”

Beyond that, the importance of where a company is based has diminished in the 21st century.

“I can’t think of it as all of my employees in one office and everybody needs to be in that office all the time,” Brown says. “You really have to take a step back and say, how do we create a work platform for your employees where they can be anywhere in the world or anywhere in the country and still engage and get their job done? The way you do that is through technology.”

Brown cites the trading desk at Victory Capital’s Cleveland office as an example of the shrinking world.

“All of the trades go through here, but none of the investment teams are actually in this office,” he says. “So all of the interaction is through digital, through online and through the trading system we have. They’re interacting within seconds, and they’re pushing trades and they are interacting, yet they don’t sit in the same office or in the same city.”

Brown will continue to travel extensively between Cleveland and San Antonio, as well as other Victory Capital locations. Wherever he goes, dealmaking is always a hot topic of conversation.

“If you’re not buying and you’re not selling, you're thinking about it and evaluating,” Brown says. “If you don’t take risks, there’s probably no reward. But you have to make sure that you’re going to be appropriately rewarded for the risk you’re taking.”